The continuation of the journal of Nei, a Paladin in the service of House Organo, written with assistance of those that survived. 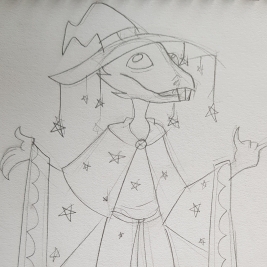 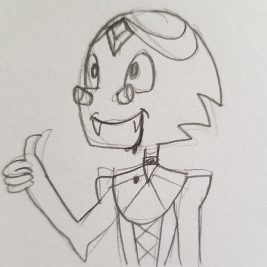 The giff knight’s armour was blown to pieces, his skin utterly desiccated, eyes sunken, face rotted. The console was obliterated.

“I was pressing that”, Jurah said, disgruntled.

“Where’s my daughter? Where’s Ubi?” the king cried. Geoff brutalised the deceased giff knight and chuckled evilly as he relieved him of his head. Geoff clung onto the lifeless grisly remains of the warrior’s body to cushion his fall.

Jurah slapped Alicath shouting, “Magic!”, thinking he had magic slaps. He was so impressed with himself, infact, he believed he was probably the God of magic slaps. This led him to ponder whether he could pass this ability onto his followers, when he had more, of course.

Keorath tried to pull javelin out of my shoulder. It came out of the floor but wasn’t completely removed from my body, which hurt! Geoff kept punching the giff’s body, even as he clung to it. Keorath pulled again, harder, and the javelin came out. Jurah muttered something about escape pods, or a lack of them, but it was hard to hear.

As the ship continued to roll, San pulled up underneath the punctured window shouting, “You’ll have to jump or find another way!” Alicath cast featherfall on himself, the king,  Eddie, and myself, allowing us to float down to San’s ship. Geoff cast down a rope and slid down, falling into a heap at the end. Keorath followed him. Jurah went next and, as his calluses started to wear down from the friction, he worried that his magic slap potential could be ruined. He reasoned to himself though that maybe it was actually okay, maybe his slaps were even more potent, as it brought the slap closer to himself a very-much definitely real god. Distracted by his thoughts he landed next to Geoff, on his back, with a thud.

San hurriedly brought us to the top of the airship to help Ubi, who is unloading ammo, alternating between the crystal and enemies, a large bulging bag at his feet. He saw us and yelled “We need to destroy it before we crash!” He reached into the bag and pulled out another grenade, tossing it into the hole in the crystal. Keorath and Jurah ran over to Ubi and tried to reach for the bag. Ubi opposed them; “Get back!” he shouted.

“Grummush guide my magic hand!”, says Jurah as he slapped Ubi. Nothing happened.

“Are you going to slap me, or help me?” Ubi asks. Jurah looked at his hand, shaking it. He then bowed his head solemnly as he realised maybe the rope did take away his powers. Keorath pulled over a loose rope and they bound Ubi with it, “Help! Stop that!” he cries. Jurah reached into the bag and picked out a canister, crushed it, and dropped it back into the bag.

Keorath and Jurah backed up towards the edge of the ship and Keorath sent a large fireball straight towards the bag. “Nooooooo” yelled Ubi. There was a flash of green light. The crystal shattered. The falling ship was blasted downwards with tremendous force, pure energy ripping through the ship, tearing through wood and sail…

The light faded, and I opened my eyes.

The air was whistling past my ears, the giff ship was falling a little further below me, riddled with explosions. San’s ship appeared to be in pieces. Alicath, the King, Geoff, Eddie, and San, were all falling around me. Jurah, Keorath and Ubi were nowhere to be seen. Even as they fall to their doom, San said, “I can still get us out here guys. I’ve been in worse. I’ve been in worse…” there was a little quaver in his voice.

Alcath cast featherfall again saving those that he could. Geoff gathers bits of San’s destroyed airship, some wood, a sail, and parachutes down, raging the whole way. The remaining companions crashed into the water, and those that made it out made their way to the shore looking over the city.

The crashing ship had sent a tidal wave over the city of Alder, which now lies in flooded ruins. Even as we watched, water was still gushing back into the sea. There was no sign of any empire ships.

“At least the royal line of Aldar survived…” announced the king shortly before Geoff knocked him out cold.

With the city of Alder in ruins, it was a phyyric victory. The Empire was stopped here, but the cost was large. With such a cost to the kingdom, who knows what the future will hold for the House of Organo.

Loving the cherry blossoms which bring a splash of colour to these quarantine days. . #cherryblossom #quarantine #nature
Turns out playdoh is a surprisingly versatile modeling medium! . #modeling #playdoh
Loving these dystopian cyberpunk vibes! . . #cyberpunk #gasmask #corona
Loving the cool effects you can get from the #glitch app!
I think I nailed Valentine's this year!
Today I made a friend on the train. Solid 13/10 for such a good boy. . #dogsofinstagram #dog #doglovers
Well I'm ready for the Death Stranding and my inevitable end at the hands to some BTs... . #deathstranding #gaming #kojima
The beautiful Scotney Castle is like something from a fantasy story. . #nationaltrust #scotneycastle #england
Looks like the sky is on fire this morning! . . #nature #sky #skyporn #London