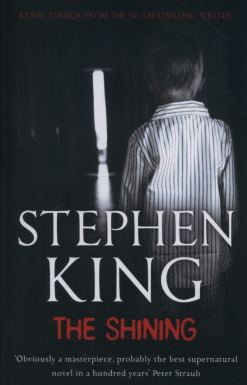 When it comes to the horror genre there are few authors as established as Stephen King, with ‘The Shining’ being almost as well known as the author himself.

This is in part, due to Stanley Kubrick’s iconic adaptation of the novel, which launched Jack Nicholson’s career. But this is not the article to discuss the film. Here we are discussing the book.

‘The Shining’ follows the Torrance family as they take over residence of the Overlook Hotel, which closes down business for the icy winter months. Jack, the patriarchal head of the family is hired to be the caretaker of the hotel whilst it is closed, performing necessary maintenance and ensuring the central heating pipes don’t burst from the cold.

But the Overlook has a dark and sordid history, and as the snowdrifts close in, that history starts to come to life.

An Introduction to Horror

I do not have a large exposure to the horror genre when it comes to novels, so this book was something of a toe in the water for me. And I have been left intrigued in the genre, but would not consider myself sold yet.

The book switches from the perspectives of several characters, including each member of the Torrance family. This gifts the reader with interesting insights into the mental states of each character, which is particularly gripping when we are shown things through the eyes of Jack and Danny. But between moments of gripping tension are lulls that seem to go in for a bit too long. Wendy is not written sympathetically, and her self-doubt drags the tension built by the other characters’ perspectives.

There are also moments of awkward, hammy foreshadowing that feel too on the nose to compliment the subtle sensation of growing evil that King is trying to kindle in the reader.

But these hiccups do not undo what King does right. Dark toxic relationships and self-delusion are explored wonderfully, adding a grounding dose of reality to the growing madness that takes place at the Overlook. Whilst the book is undeniably a supernatural horror, the human, non-supernatural elements ratchet the tension, making the supernatural occurrences all the more terrifying.

The crescendo of the story has the feel of a false start, losing tension too quickly but when it does pick up the pace again the climax is tense and disturbing.

Overall I enjoyed reading this book. The Shining is not a masterpiece of writing; scattered with a few too many obscure metaphors, and the pacing issues I have spoken about above, but what it does well it does very well. It is a satisfying read and I am looking forward to exploring more of King’s writings to see if they offer more of the tasty morsels that I found in this book.

1 comments on “Book Review: The Shining by Stephen King”

Today I made a friend on the train. Solid 13/10 for such a good boy. . #dogsofinstagram #dog #doglovers
Well I'm ready for the Death Stranding and my inevitable end at the hands to some BTs... . #deathstranding #gaming #kojima
The beautiful Scotney Castle is like something from a fantasy story. . #nationaltrust #scotneycastle #england
Looks like the sky is on fire this morning! . . #nature #sky #skyporn #London
It's a frosty morning in the UK today which leads some pretty awesome sights as the sun burns through the fog. . #nofilter #england #frozen #cold
Really surprised to kind such colourful carp in a castle moat today! . #carp #castle #moat #fish #england
Getting some inspiration from Bodiam Castle today... . #castle #england #dungeonsanddragons #fantasy #dnd
London always has these really beautiful finds down the backroads... . #London #urban #flowers #city
Oh hi there Kirby! How are you doing? . #graffiti #London #videogames